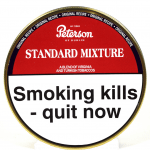 Back in late 2017, Dunhill announced they would cease producing their famous and much loved pipe tobacco range, which left many devoted fans with a heavy heart. Two years on, Peterson have boldly taken the torch and relit the fire without altering the recipes, to bring back some old friends.

Peterson Standard Mixtureis a balanced blend of Latakia, Oriental and Virginia tobaccos which have been lightly toasted together for a smooth, nutty, all-day smoke.

The room note is wood-open-fire smoky, a welcoming, homely scent. Medium in strength, it appeals to most smokers who like their Latakia to play with its associate tobaccos, rather than dominate and mask them.

Because Peterson Standard Mixture is ribbon cut, it is easy to prepare for smoking and behaves well upon lighting, through to the last puff.