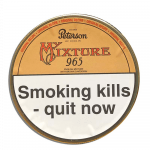 Back in late 2017, Dunhill announced they would cease producing their famous and much loved pipe tobacco range, which left many devoted fans with a heavy heart.

Two years on, Peterson have boldly taken the torch and relit the fire without altering the recipes, to bring back some old friends.

Ribbon cut and so easy to pack a pipe with, it’s a pleasure in itself, with the fragrance of a log burning fire alongside the sweetness, it’s like Autumn any time of the year!

If you like your Latakia blends, you’ll love this!

This may be a sweet English mixture, or maybe it should be classified as a Scottish mixture?

Either way, it’s not overly sweet. It has some fermented flavours as well, acidity in the background that you may detect, which compliments the woodiness, the spice and the citrus elements of the respective Latakia, Oriental and Virginia.

There’s creamy nuttiness in here too. All together very enjoyable.